a comedy in which money most definitely takes precedence

One of the most famous works by the leading playwright of French classicism has been entertaining theatre audiences for almost three and a half centuries by showing, in an excellent way, what the consequences are of a pathological obsession with money or a passionate addiction to the spirit of mammon. The great master of comic characterisation presents a colourful overview of the endless ways manipulation, deception and hypocrisy can occur within the most intimate of environments – the family. When it comes to money, there are no rules of decency or respect governing the relationship between children and their parents.

Widowed money-lender Harpagon has dedicated his life to greed. Stinginess is a passion for him, which places restrictions on his children (his son Cléante and daughter Élise), not to mention the servants. He knows how to accumulate money through relentless usury and self-sacrifice.  His children aren’t capable of doing anything but they want to live and enjoy their lives, if possible with an outstretched palm. Harpagon´s obsession with gold evokes their hatred and laughter – emotions which only get stronger as their father begins to manipulate their lives more extremely: he is planning to marry off Élise to an ageing toff even though she’s in love with a young man, Valère, and Cléante is supposed to marry a rich widow despite the fact that he has fallen for young Mariane from next door. In fact, Harpagon is thinking about marrying Mariane himself. Through this messed-up family, Molière unveils the results of Harpagon´s passion for gold. The children and their allies are forced to take matters into their own hands, tricking their mean father and teaching him a severe lesson. Their means (hypocrisy, sweet talk, dishonesty, deceit, callousness and even theft) are no less repugnant than Harpagon´s monstrous egocentrism.

Harpagon certainly is a quintessential miser: he extorts, deceives, threatens, and calculates, but he doesn´t steal and he plays with all his cards on the table. This cannot be said about his adversaries. In his depiction of behaviour, Molière appears to be a moralist, but one who doesn´t moralise; he remains a comedy writer with a background in commedia dellʼarte and old French farce. The Miser is thus a tale about the state of the human spirit which simultaneously offers great entertainment. The production of The Miser, with Boleslav Polívka in the role of Harpagon under Stanislav Moša´s direction, thus promises to be an exceptional theatrical event.

BOLEK’S MISER AS A ONE-MAN SHOW

At Brno City Theatre they are performing Molière’s morality play The Miser with Bolek Polívka in the main role. (…) It must be said that anything with “Bolek” in is almost certainly going to be a winner even before the performance starts, and so it is here with Polívka’s one-man show. (…) He extended – and in places also enriched – Molière’s character through the clowning that he does so naturally and well. His excessive gestures and declamations are often reminiscent of Jan Werich despite the genealogical differences and dissimilar accents of their humour. (…) At the moment when Frosina is persuading Harpagon that his potential bride finds far older men attractive, and he expresses his concern that she might eventually leave him because of someone even older than he is, the play really hits the jackpot and we are left wondering as to how much of it came from Molière and how much was from Bolek’s clever contributions. (…)

(…) Brno City Theatre has never built its repertoire on the presence of celebrities. That’s because all of the ensemble’s actors are actually celebrities. This is proved by the latest premiere, where all of those taking part are real partners for Boleslav Polívka, who takes on the tempting but challenging role of Harpagon. (…) If a famous actor is cast in a production, it often happens that everyone else, even including the director, subordinates themselves to the big star. Nothing like that happens in this production. Kleant, Harpagon’s son (Kristian Pekar) is a decent foil to his messed-up father. The energetic, even eccentric young man, whose costume itself speaks volumes about his vigorous youth, played his role to perfection. Harpagon’s daughter Eliška is played by the fragile Svetlana Janotová. It isn’t easy to be a calm character in an energy-packed comedy, but Janotová does it well. She plays her character as the author intended, and her portrayal of emotions is always believable, whatever she finds herself feeling. The way she battles for her love is most poignant. Jiří Mach plays Valér, who is supposed to be Harpagon’s right-hand man, with the ease and charm of a man with two faces. He managed to blandish the miser while simultaneously attempting to defend his love interests. (…) One of the production’s most impressive characters is the matchmaker Frosina, played by Alena Antalová. While the prime male role has already been given by the author to Harpagon, it is the marriage broker that stands out among the females. Antalová’s energy creates a greater space for comedy than is normally seen in this play. (…) Michal Isteník was also particularly comic in the role of Jakub, who is both cook and coachman. (…) Director Moša cast the individual actors according to their acting dispositions and gave their mouths and gestures free rein to interpret Molière, and that was the correct, guaranteed path to success. (…)

(…) Polívka portrays his stingy Harpagon with an appropriate amount of his wonderful clowning, and a still greater dose of expressiveness. As intended by the director and author of the text adaptation, Stanislav Moša, The Miser is more than just a farce. Polívka’s Harpagon is also a sad, tragic character who gradually comes to realize that he has become old. (…) The money-lender is perhaps not so repellent, despite his greed and self-centredness. (…) Spectators need not worry, however - The Miser is still mainly a farce, of course. At Brno City Theatre this is enhanced by two other excellent comedians, and I mean natural-born comics – Michal Isteník and Jan Mazák. The first of these uses his sonorous voice, manly figure and the expressiveness of his face and body in the double role of Harpagon´s cook and coachman. Mazák is calmer, playing Flok, a servant working for Harpagon´s son, very nicely as a cunning and clever lad. Another excellent comic duo is that of Harpagon´s servants Stýblo and Tříska (Jakub Uličník and Alan Novotný). The former also acts using his naked manly belly, a good idea from the director or the author of the costumes, Andrea Kučerová. Moša gave the beautiful role of the matchmaker Frosina to Alena Antalová. She is temperamental and conducts fabulous dialogues with Harpagon and the girl Mariana (Dagmar Křížová), whom the old money-lender wishes to marry. (…) Antalová and Polívka clearly enjoy Molière, and the director gives the actors a noticeable amount of leeway for improvisation. The more serious characters of Harpagon´s children, Kleant and Eliška, are played by Kristian Pekar and Svetlana Janotová. (…)

BOLEK POLÍVKA HAS BECOME A MISER IN HIS OLD AGE

(…) The theatre director himself took on the job of producing Molière´s The Miser with Boleslav Polívka – and show me a person from Brno who wouldn´t want to see their compatriot in action – especially when he’s the mime, clown and actor of the century. (…) After Harpagon´s unhappy children, Kleant and Eliška (Kristian Pekar and Svetlana Janotová) have made their entrance, a capricious, miserly, cunning, mistrustful and vindictive old man comes hobbling onto the stage, filled with the feeling that he can trick the whole world: it’s Boleslav Polívka as Harpagon. (…) Polívka plays him with enthusiasm as the sneaky, somewhat boastful head of the household who forgets the most important things and is incapable of self-reflection or taking responsibility for his own lies and errors – in fact he doesn’t possess the decency to even admit them, let alone correct them. Harpagon goes on hobbling around with his stick for a while, and then a change of pace occurs when the matchmaker Frosina (Alena Antalová) takes the stage like a hurricane. She is excellent! Polívka is also fortunate in having several other great co-actors to work with. Let us name, for instance, Michal Isteník in the nimble roles of both Harpagon´s cook and the coachman Jakub, Jan Mazák as Kleant´s servant Flok, and Alan Novotný and Jakub Uličník as Harpagon´s servants. Brno City Theatre has created yet another piece to add to the list of long-lived works on their repertoire. (…)

(…) What is impressive right at the beginning is the realistic scene of a room which radiates affluent certainty. The prompter´s box stands right at the front: a female prompter enters it at the beginning of the play; her exit marks the end of the performance. The costumes of all the characters are colourful and distinctive, making it clear that it’s a comedy that’s being performed. The actors´ interpretation of their characters and their expressions are thus emphasized, and they perform in the chosen spirit throughout. It seems to me that the director gave the actors a very decent amount of space to make a personal contribution to Molière´s text. Naturally, the central figure is Boleslav Polívka. When played with comic exaggeration, Harpagon is a clearly-defined type, and Polívka grasped the character fully in his inimitable way, adding a lot of his own words and making inventive use of movement. His Harpagon is perhaps not as repulsive and provocative as he can be due to his shameless greed and miserliness. He is also a somewhat unfortunate person who is controlled by his obsession and is not respected by anyone or taken very seriously. At the end, he is almost touchingly comic when he is happy to please everyone - if it doesn´t cost him anything, of course.  Bolek´s Harpagon is perhaps different from many others but he makes it his own. Everyone who likes his comedy acting and multifaceted talent for creativity and improvisation will leave the performance satisfied. The team from Brno City Theatre dance to the same tune as the main character in the comedy. I would like to name at least the excellent Alena Antalová, who obviously enjoys her role. Michal Isteník, cast in the double role of a cook and a coachman, also provides a nice miniature exaggeration of a two-faced manipulator, i.e. another nice character that can be found in every time period, including the current one. (…)

(…) Thanks to the modern translation and wordless jokes which the actors seem to improvise on stage, we get to watch a modern, contemporary play and not a piece which is somewhat redolent of mothballs. (…) Bolek Polívka works as a catalyst that transforms Brno City Theatre’s actors into a team of excellent comedians (the females among them in particular). (…) Director Stanislav Moša leaves them plenty of space to have a lot of fun, and so each performance is different and things don’t get monotonous for those up on stage. (…) Bolek Polívka operates at full throttle from the very moment he steps onto the stage, yet no one else is left behind. He has the very special gift of being able to turn any situation, however unexpected, into sweet and pleasant fun. (…) So, for example, the moment when Harpagon is reunited with his stolen money is elevated to an uncommonly fine study in the art of pantomime. (…) Of course, the servants (mainly Jakub Uličník and Alan Novotný), who according to the old commedie dell’arte traditions could afford to tell their masters what no one else would dare to say, enjoy improvising in a similar vein to the Master. And Michal Isteník simply cannot be omitted - he shines, sparkles and romps around like a ball of lightning. (…) 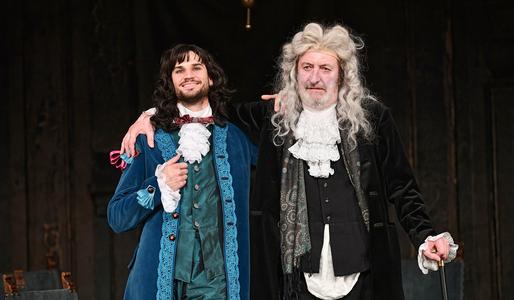 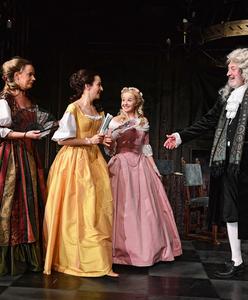 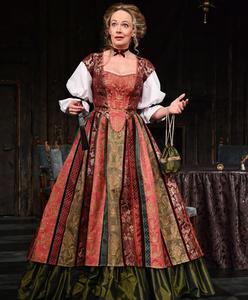 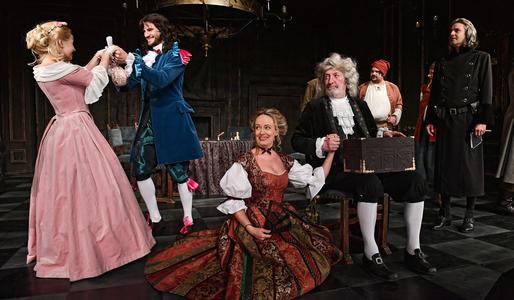 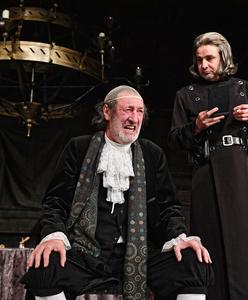 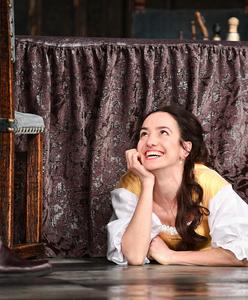 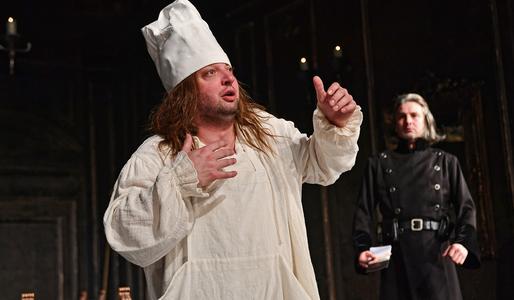 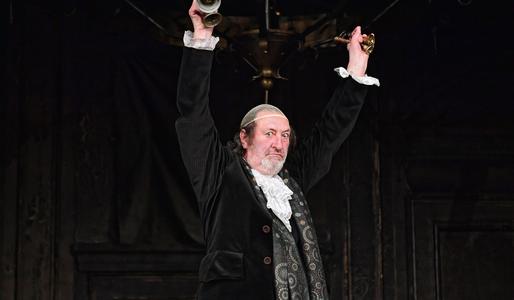 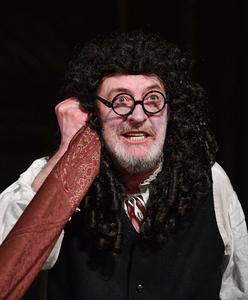 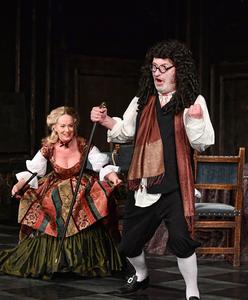 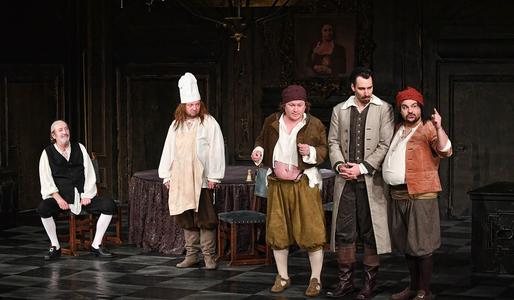