‘Thy full supremacy thou knew'st, and that
Thy beck might from the bidding of the gods
Command me. (…) You did know
How much you were my conqueror, and that
My sword, made weak by my affection, would
Obey it on all cause’.

Renowned dictator Julius Caesar is dead, and so are his murderers. Mark Antony now rules the group of defenders of Rome. However, he is at the peak of his power only until the moment when he has to leave for intoxicating Egypt, where the mighty commander is completely enchanted by the unusual spell of Queen Cleopatra. In her bed, Antony finds such strong love that his will to fight and rule leaves him completely. However, one of the strongest men in the world cannot simply leave his sword and his duties as a ruler behind him without consequences. Antony´s fighting skill, mettle and decisiveness as a ruler vanish and the passion he feels for Cleopatra eventually leads both lovers to ruin…

One of William Shakespeare’s most engaging plays, Anthony and Cleopatra features the clash between vice and virtue, desire and duty, uplifting love and political pragmatism. Love becomes a trigger for war, and whole empires are sacrificed in the name of lust. Shakespeare expressed this story of love and power with exquisite poetry that is still breath-taking in its beauty and intensity even centuries later. After The Merchant of Venice and King Lear, this play is the third opportunity director Stanislav Moša has taken within a short length of time to present theatregoers with the Shakespearean experience in all its contradictions and magnificence.

Shakespeare´s romantic tragedy Antony and Cleopatra is a challenge both for the audience and the theatre. The spectators need to know at least a bit about the historical context and not confuse Octavius Caesar with his uncle, the more famous Gaius Julius Caesar, who is not mentioned in the play at all. The characters talk about all the events (battles), but only scenes featuring complex interpersonal relationships take place on stage. In general, the axis of the story is well-known, though it is very pleasant to watch the triumvir and famous military leader Mark Antony fall once again into Cleopatra’s web of love, as performed by the Brno City Theatre ensemble.

This is especially true when the director and manager of the theatre, Stanislav Moša, chose some of the theatre’s best-known actors for the main roles: Ivana Vaňková and Petr Gazdík. The majority of spectators are aware that they have also long been partners outside the theatre. However, this wasn´t the reason Gazdík was chosen, as Moša assured journalists before the premiere. He selected Ivana Vaňková to be the ruler of Egypt immediately, but thought about her partner for longer. However, he chose well: Vaňková perfectly captures Cleopatra’s rapidly changing moods. She is a loving woman, but on occasions hysterical, she is calculating and prudent, both noble and low. Petr Gazdík contrasts somewhat with Cleopatra, as he doesn´t show his feelings so passionately. He is clearly in love, yet still keeps a cool head. Michal Isteník didn´t disappoint either in the role of Domitius Enobarbus, Antony´s friend. He makes humorous and ironic remarks on the plot and displays his typical grimaces; the role plays to his strengths and he goes down well with the audience. He is more serious, however, in the moment when he betrays Antony. This act is based on real events, but otherwise Shakespeare modelled this character nicely in his own way. Jakub Uličník is less prominent as the already mentioned triumvir Octavius Caesar. He clashes with Antony and their dialogues are crucial to the play, but one feels that Octavius should have a little more drive. Uličník is an excellent actor and comedian, but he is more suited for other types of role. He speaks the cultivated Czech of the translator, Jiří Josek, which we can also hear from Viktor Skála in the role of another important character, the triumvir Marcus Aemilius Lepidus, and it is also nice from Dagmar Křížová in the role of Antony´s wife Octavia. Dušan Vitázek was more distinctive as the rebel Sextus Pompeius, and Jiří Mach was also noticeable as Thidias. Among all the characters, even those that have not been named, it is logically the main couple that stand out. There will be a lot of water under the bridge before Ivana Vaňková plays an ageing Cleopatra, and we perceive her charms all the more in the role of a seductress of important men. Director Stanislav Moša brought the pace closer to that of a film performance, with fast cuts that send us alternately to Egypt and Rome. As he said himself, he shortened the original author´s text by about 30 per cent to achieve greater clarity and to focus the concentration of the viewer more intensely. Scenographer Christoph Weyers created four quartets of high columns for the Drama Theatre, remotely evoking the architecture of both sites. As the venue changes, each quartet changes its position. An important element that livens up the set is the play of lights (David Kachlíř) - the dim lighting inside each of the columns looks fantastic. The costume artist Andrea Kučerová dressed the ancient characters in contemporary clothes, with only some of Cleopatra and Octavia’s dresses having an “ancient” cut. We can hardly hear Mirko Vuksanović´s music, but it is pleasant and in harmony with the script and the stage. It would be a shame to miss this production.

Antony and Cleopatra – premiere of the famous drama in Brno

… The famous play was staged by the director and theatre principal Stanislav Moša, an experienced director who has created hundreds of productions both in the Czech Republic and abroad. He has been directing since 1983, when he graduated from the Faculty of Music and Performing Arts, so it’s not surprising that his direction of Shakespeare´s work was at such a high professional level. Playwrights Jan Šotkovský and Jiří Záviš contributed to the adaptation of Jiří Josek´s translation. I do not have Josek’s original translation, but I am convinced that significant cuts were made to the text. Josek approached Shakespeare´s texts in a special way. A year before his death (2018) he wrote for the Lidové noviny newspaper: “I do not believe that what is incomprehensible is poetic, especially in the case of a theatre play, where an incomprehensible utterance might as well not exist at all - it is merely a noise which the spectator has no chance to absorb.” Yes, Moša and the playwrights had a text which spoke to the audience in a clear, comprehensible language. And via a certain shortening of mainly the secondary dialogues, the text gained pace, with an emphasis on those pearls amongst Shakespeare´s sentences that then sound all the more urgent: If I lose my honour, I lose myself…Fate knows very well that we do not care if it is against us… It is strange that we often regret what we longed for most…

Partners on stage and in life
Antony and Cleopatra is a huge acting opportunity, particularly for the two main characters. In the real world, Ivana Vaňková and Petr Gazdík are husband and wife. Theatregoers can see and feel the enthusiasm, with a focus on detail, with which they played their roles. There is an abundance of emotion, yet the acting is realistic.  They are contemporary people, and yet important figures from history. There are several male roles in which the heroes have to decide between love and public duty, and this is also true of Shakespeare’s work. Petr Gazdík played the role very well. The spectators believe his suffering and hesitation, they believe his defiance. Gazdík´s Antony can be gentle and submissive towards Cleopatra, but immediately afterwards he is a soldier and conqueror with a storm raging inside him. In her time, Ivana Vaňková has played many contradictory female characters that have allowed her to show her excellent acting ability. However, the role of Cleopatra is exceptional and the actress also portrayed her exceptionally. Without hesitation, it can be said that it is the role of her life.

In his plays, Shakespeare also leaves space in the spotlight for those playing other characters. And so we can also admire Michal Isteník as the humorous Enobarbus: I am starting to regret my honesty - only a fool is faithful to fools. Or Dagmar Křížová as Octavia, tempting with her femininity: Poor me, why do I have to love two who hate one another… But we could name all the actors in the story. Each of them played their role very well, and each of them expressed that which is essential about their character, which was also thanks to the perceptive direction…

The contrasting difference between the women´s and men´s costumes

The whole ancient tragedy, with its unique atmosphere, takes place on a stage designed by Christoph Weyers. The blue-lit columns – a slight compromise between heavy Egyptian and light ancient European architecture – move in the low light and effectively create individual scenes with the aid of back projections and supported by short and imaginative musical interludes, the author of which is Mirko Vuksanović. The costumes were designed by Andrea Kučerová, and in the case of the women’s clothing the result is excellent. Cleopatra´s outfits are particularly beautiful and functional. Both the artist and Ivana Vaňková certainly got a lot of joy from the designs. Everything is beautiful and inventive on Cleopatra. On the other hand, the choices made when it came to the men’s costumes were somewhat perplexing. Antony in a stiff 20th century blue suit? If he’d only worn a white shirt the contemporary aspect wouldn’t have been so intrusive. The same is true for Thidias in a light-blue suit, while in contrast Lepidus and Agrippa sported unusually long coats… And these are not the only things about the male costumes that the author of this review fails to understand.

However, my overall evaluation of the production is more than positive. The easily-digestible, realistic direction complimented the work, the performance of all the actors was convincing, excellent – as the spectators already expect from this ensemble. The duo of Vaňková and Gazdík put on a really amazing show.

So, all that’s left is to congratulate the theatre on this, their seventy-fifth premiere. 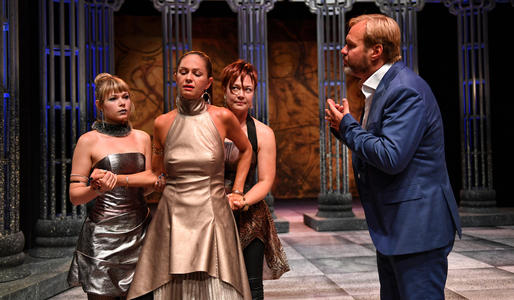 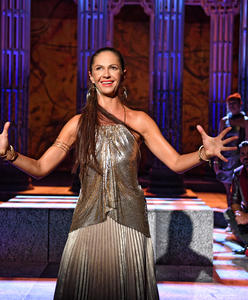 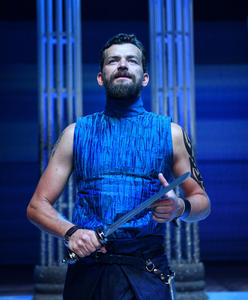 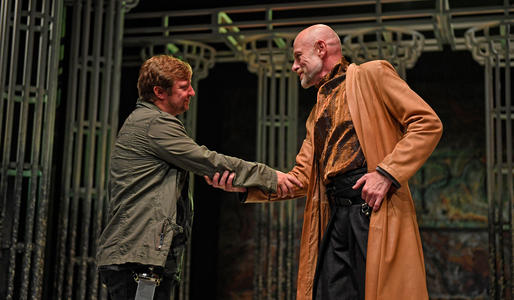 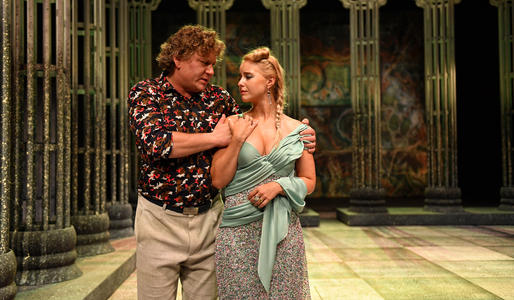 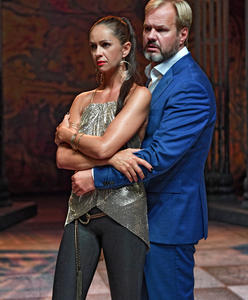 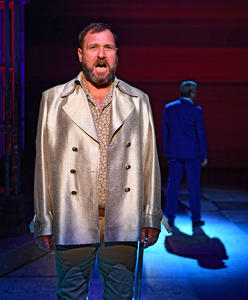 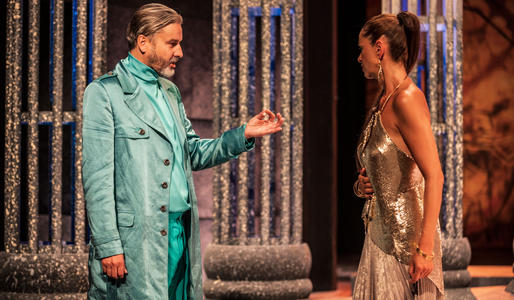 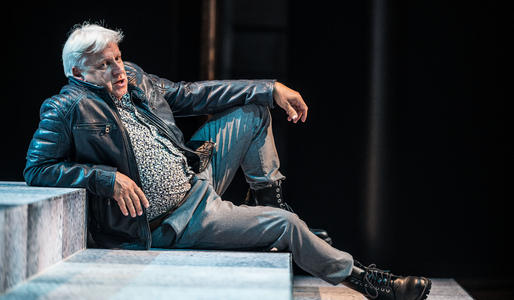 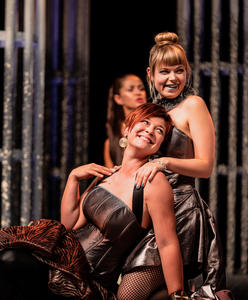 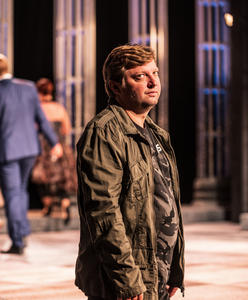 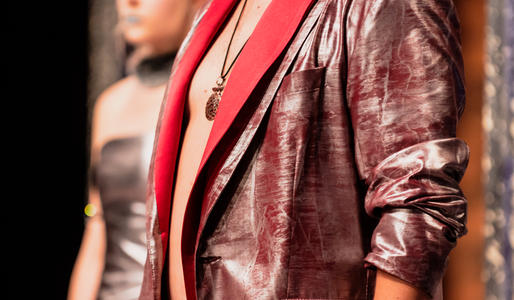