a family drama about the search for the meaning of life

American playwright Tracy Letts, who is also an excellent actor, is certainly the strongest heir to the great tradition of American family dramas represented by names such as Eugene O’Neill, Tennessee Williams and Edward Albee. One of his latest plays (from 2016), Mary Page Marlowe, tells the story of the extraordinary life of an ordinary American woman, a story about the moments in life one remembers (or doesn´t remember) in retrospect.

Everything starts with the efforts of a forty-five-year-old mother to explain to her children why she is getting divorced – and eleven acts follow in which we watch Mary at different ages, from when she was a ten-month-old baby in a cradle up to when she is a seventy-year-old woman waiting to die in hospital. The author asks us in an exceptionally powerful way: “How come this uncompromising, confident and attractive woman didn´t live the life she wanted?” And above all, he keeps us in suspense about what Mary Page really is like. Is she good or bad? Happy or unhappy? Beloved or betrayed? Loving or betraying? A victim or a culprit? The extraordinary work thus unobtrusively demonstrates how complicated and ambiguous a seemingly ordinary human life story can be, as well as how different a single person can be at different stages of their life. As Charles Isherwood, a New York Times reviewer, aptly wrote in his enthusiastic review: “The form of the play seems beautiful and touching to me, as if you were flipping through your friend´s photo album. Some faces seem familiar, others unexpected. And then you come across someone completely unknown – a person who seems to have meant a lot to your friend – and you will realize with sadness that you will always know your loved ones only in fragments and incompletely.”

(…) All of the performers of Mary are almost always present on stage. In movement etudes, they often accompany the episode of life that is currently being played out. There is the impression that fragments of memories tumble through her mind like in a kaleidoscope – at one point a seemingly unimportant moment suddenly comes to the fore as déjà vu.

Each of the actresses actually creates a completely new character that has little in common with the other personalities of the same heroine. Perhaps, paradoxically, this is what makes the performance authentic. Looking in a photo album, we find that we do indeed change a lot, and it’s not just about looks – the invisible scars inflicted by life hurt and grow in numbers.

Markéta Sedláčková has the most expressive but also the most difficult role, portraying the oldest Mary (we see her at the ages of 59, 63, and 69), taking stock of her life and heading towards death. She is subtly changeable, yet stable in her balanced view of the world, making her the most likeable Mary Page.

Other actresses in the title role – Radka Coufalová, Lucie Bergerová, Barbora Goldmannová, Barbora Slaninová and Anna Bergerová (alt. Gabriela Čtveráčková) – offer a range of distinct images of Mary, from a stubborn little girl and a hopeful teenager who wants to control her destiny based on the predictions of tarot cards, to a frivolous, self-confident seductress and a divorcing wife, to a mother distressed by the death of her son in the therapist’s chair and a sadly embarrassing alcoholic. It was only the wisdom of the late years in life that seemed to cover Mary’s troubles in life with a merciful cloak of forgiveness.

Eleven Probes into One Woman’s Life

(…) With this, the theatre offers the best of its feminine ensemble.

Mary Page, marked by number 3, portrayed by Lucie Bergerová, sits on stage first. It is 1986, she is in her forties, and in a gradually escalating dialogue, she announces to her young son and older daughter that she is divorcing their father and moving from Dayton, Ohio, to Kentucky. She does not return to the stage until the tenth scene, after four years, when she searches for her lost son. She finds him but, horror of horrors, she learns that the boy is using drugs.

All six actresses enjoy their roles, relish them. Even in the most tense scenes, and know that there are quite a lot of them in the play. For example, Mary Page 2 performed by Radka Coufalová. It is 1996 and 50-year-old Mary is talking to her husband Ray (the great Igor Ondříček). A few days earlier, she had caused a serious traffic accident with 3.2 per mil of alcohol in her blood, having seriously injured an elderly man. She is awaiting trial and jail time. Her husband, of course, does not praise her... On the contrary, director Mikoláš Tyc offered the already balanced Mary Page 1 at the ages of 59, 63 and 69 to Markéta Sedláčková (she is many years younger!). In one of the three scenes we see her with her now different husband Andy (Patrik Bořecký) in 2009, she is now sixty-three and rejoices at the announcement that she is free, apparently her suspended sentence is over.

Anna D. Shapiro, director of the play world premiere in 2016, wrote: “What I like about Mary Page Marlow is that she and the author who invented her are no longer concerned with order and meaning, but offer a story that shows what life can really look like: like a pile of disorganized photographs lying in a box that you are sorting through...” In one such imaginary photograph, we see Barbora Goldmannová as 36-year-old Mary Page 4 in 1982 in the office of her therapist (performed with ease and elegance by Lenka Janíková) in Dayton. She opens up, at times she is upset, and finally tells her therapist that she doesn’t really know who she is. Before that, she talks openly about her role as wife, mother, lover, she talks about sex. By the way, sex is on stage a little bit too, when Mary Page 4, still 27, gets out of bed in her hotel room in her underpants, dresses up and has a dialogue with her lover, her boss, portrayed by the well-built Kristián Pekar.

The individual scenes take place in decent civilian costumes and Mark Cpin’s sets. He placed the hospital bed on which Mary Page 1 finds herself (not at the end of the production), the chairs, sofas and other pieces of furniture in a space reminiscent of a factory hall. We can see to the very end of the stage lined with seven elements of (as if) iron construction in the form of (as if) gantry cranes. The stylized factory symbolizes the difficulty of life. Lighting designer David Kachlíř switches on different coloured ceiling lights between scenes.

I have not yet mentioned Barbora Slaninová, that is Mary Page 5, nineteen years old. And also Anna Bergerová, who played Mary Page 6, just 12 years old, at the Sunday premiere on 11 September. Gabriela Čtveráčková, an equally skilful girl, alternates with her. The female ensemble is completed by Nikol Wetterová, Esther Mertová and Eliška Skálová. Also Evelína Studénková as the mother of the title heroine and Diana Velčická, who has a dialogue with the 69-year-old Mary Page 1 in the hospital. The scenes are also connected during the transformations by the pleasant music of Robin Schenk, and Adéla Stodolová helped with the movement of the actors.

The director succeeded in what Radka Coufalová told journalists before the premiere: We didn’t try to unify the title character, because at each stage of life we (Mary Page) are each on a different energy base. Come and see, you won’t be bored.

A Cruel and Believable Story of a Life Gone Wrong

As the first premiere of the new season, the Brno City Theatre has chosen the play Mary Page Marlow by the American playwright and actor Tracy Letts, which was rehearsed some time ago. And it should be pointed out from the outset that viewers looking for light, relaxing entertainment should avoid the local Drama Theatre this time. Which means, paradoxically, that a drama describing the entire life of an “ordinary” American woman, struggling with a dysfunctional family and her own relationships flushed with alcohol and drugs, is a remarkable and valuable piece.

It’s just so harshly real and true to life that it’s not comfortable to watch. You just can’t help getting engaged. Moreover, Tracy Letts is certainly not going to reassure us during or at the end of this life story that it will turn out well. Which is also made impossible by his choice not to tell the story linearly, but rather in flashbacks, using scenes whose outcome we have to guess gradually, because they tend to be the trigger for the main character’s life drama rather than a real turning point in her life.

(...) But the whole is both cruel and believable. And it does not matter that the narrative is told in skips, including the fact that the main character is played by six actresses over the course of her nearly 70-year life, from a 12-year-old girl to an old woman dying quite peacefully in a hospital. Of them, the performance of Barbora Goldmannová as a promiscuous harlot in Mary’s younger and middle age and Radka Coufalová as a woman in her fifties heading to prison after her fatal mistake should be highlighted. (…) 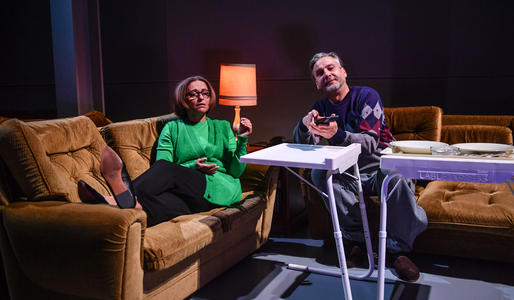 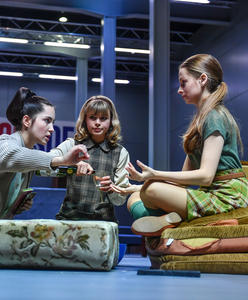 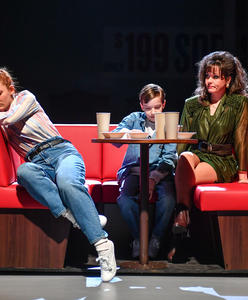 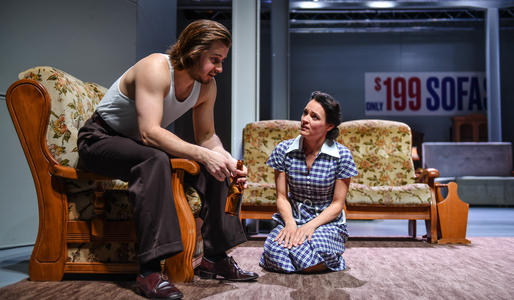 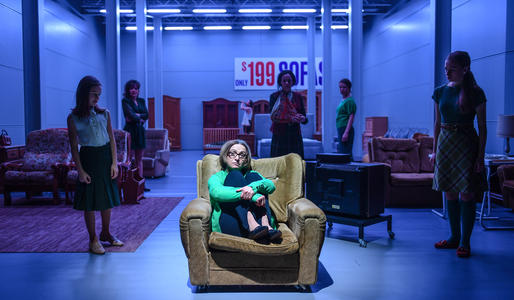 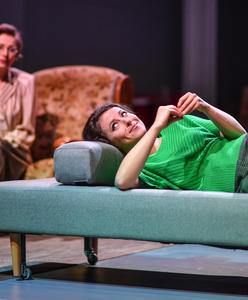 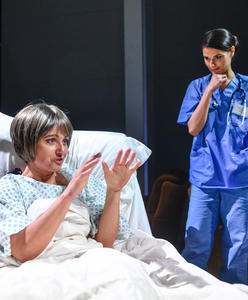 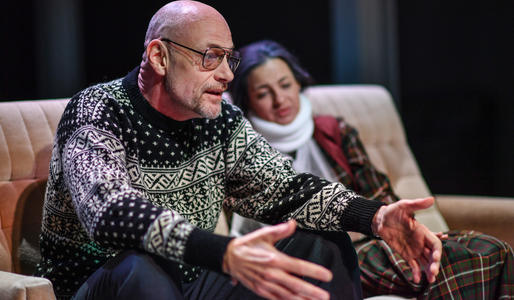 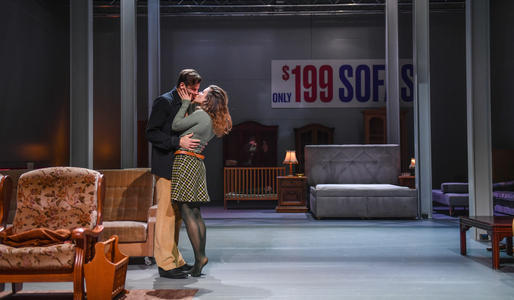 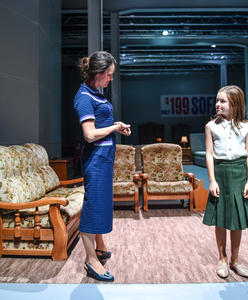 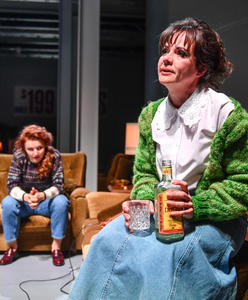 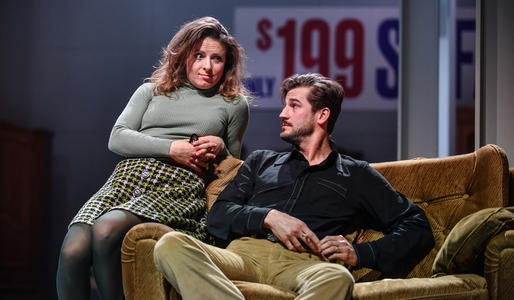