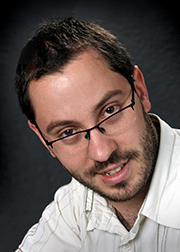 After graduating from grammar school, he studied at the Brno Conservatory, specializing in composition and conducting. Afterwards he studied orchestra conducting at the Faculty of Music of the Janáček Academy of Music and Performing Arts (JAMU) in Brno. In 2006–2008, he studied at Hochschule für Musik und Theater in Leipzig and Weimar, during master courses he met conductors Kurt Masur, Fabio Luisi and Zsolt Nagy.

Since the year 2000, he has been working as the choirmaster of Ars Brunensis. He performed a number of concerts with the ensemble throughout Europe. As a conductor, he has worked with Czech and foreign ensembles, including philharmonic and chamber orchestras, such as the Moravian Philharmonic Olomouc, Czech Virtuosi; choirs, e.g. Jenaer Madrigalkreis, Bohemiachor, Brno Academic Choir; and theatres, e.g. the National Moravian-Silesian Theatre, F. X. Šalda Theatre, Maribor National Drama Theatre, Walensee-Bühne.

He has cooperated on various projects with many prominent artists, including Vladimír Franz and Jiří Pavlica.

As a conductor and music director, he also participates in recording film and scenic music for leading Czech theatres, radio, television and foreign productions. He has made a number of records, mostly compositions of contemporary authors, for Naxos, Vienna Modern Masters, Supraphon, Capstone records, Querstand and others.